We each had our own challenges as I mentioned at the beginning of this story and Aharon was no different. He added a few good challenges throughout the event. His rear derailleur had shifting issues he was able to fix at a bike shop in Redmond. There he also swapped out his front chainring for a smaller one because he was in so much knee pain. His shoes were causing him pain because his feet swelled, so he cut out the sides to create some more room until he could buy another pair of cycling shoes in Wenatchee; a pair of super comfy spin class shoes!

I can’t tell his whole story, nor would I choose to, but I would like to relate the part of his XWA experience I was able to share with him after Thomas and I had finished.

The next task was to bring Aharon home!
He is one to push through whatever to reach his goal, long after it doesn’t make sense or others may think it unwise to continue. This was one of those times he chose to continue, over and over, sometimes after he thought he’d already pulled the plug!

On that last day for Thomas and I for example, around 11am Aharon left Wenatchee by bicycle just before we reached Ewan for water at the church. He went to bed the night before a mess, feeling beaten to a pulp by the Colockum and in so much pain he couldn’t imagine continuing. His plan for that morning included renting a car to return home. Instead he got on his bike, and it felt great! He packed up and headed up Rock Island Grade!

With little cell reception, Thomas and I chatted with him from time to time before we left Tekoa. We set out planning to meet Aharon and encourage him along his way as he passed through the town of Lind.

A plan evolved during our drive from Tekoa to Lind. A suitably ridiculous plan of comradery spurred by the friends in the dot watcher messenger group. With Stacey and Thomas’ Jeep, we explored a demolished trestle in Lind while we waited for Aharon to arrive - very cool! He wheeled into town, happy to see us and not looking at the end of his rope.

We joined him at Kindra’s Coffee Bar for a warm beverage and some food. The weather was much cooler with on and off rain. After encouraging him and watching him pack up again, we watched him sail off for the trail! 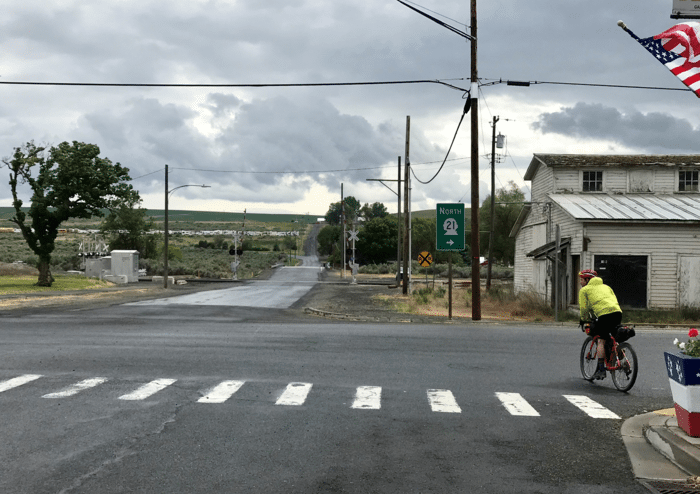 You can kind of see in the photo that the wagon riders had arrived in Lind; a huge village or RV’s!

Phase two of our plan - Thomas and Stacey drove me BACK to Ritzville, to that same Love’s Travel Stop, and left me sitting in a booth at the Carl’s Jr with a bag of clothes while they continued home with the rest of my gear and bike. Now I awaited another friend of ours, Fabien, to make the trip from Seattle where he was borrowing a mountain bike (thanks Yonnel!!) so he could ride gravel with Aharon! Fabien doesn’t have a gravel bike yet, so this was especially ambitious for him to jump into. He’s an incredibly strong cyclist, but had very little experience off pavement.

The pieces came together nicely; he left work to pick up the bike, Milan had lights he could borrow! Then onto the ~4.5 hour drive to Ritzville. While I waited, other dots approached, including Justin S who I only barely caught as he left the gas station in good spirits and with a riding buddy to keep him company!

Aharon beat Fabien to the Love’s. 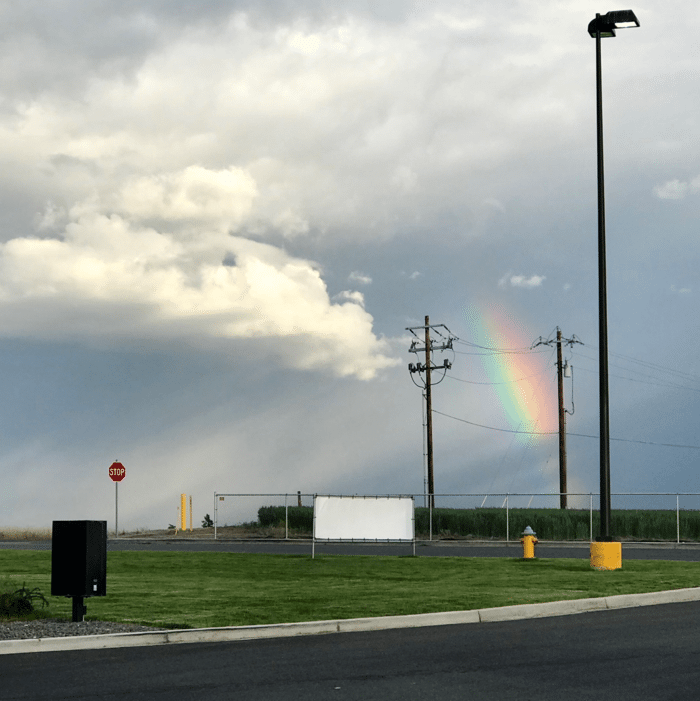 He ate some food and took a much needed rest. 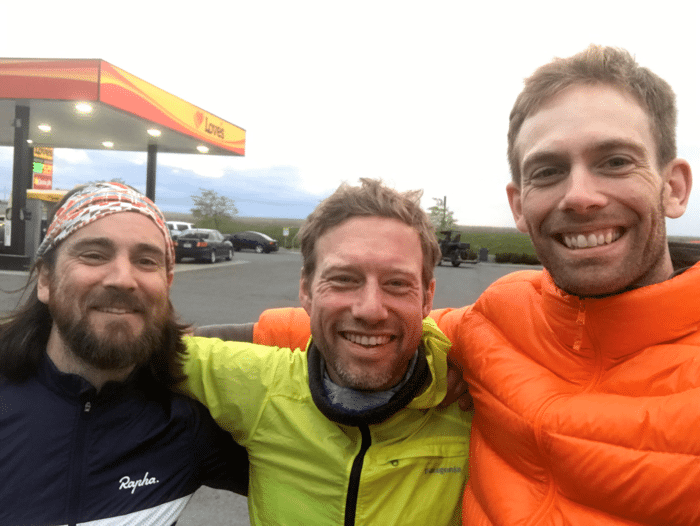 As he was packing up to continue, Fabien pulled into the parking lot! As he started to prepare to ride with Aharon I realized how outrageous the plan was - he hadn’t even time to test ride the MTB before arriving! He swapped over the pedals in the parking lot. There were no bottle cages so he would carry his water, and everything else, in a backpack. 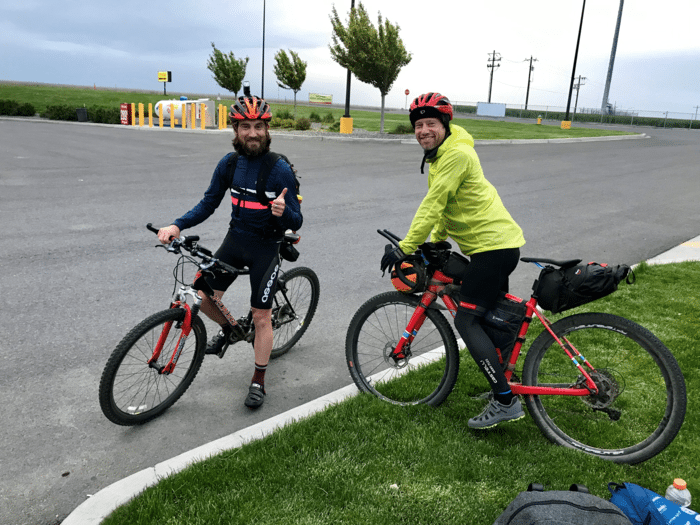 Wearing my helmet with freshly charged helmet light atop it, Thomas’ headlight strapped to the handlebars, and Milan’s tail light, Fabien was ready for his first gravel ride - into the wilds of a Troy route around 8pm; what could go wrong? It’s only around 100miles to the end right?

After watching them wheel away, I packed my things into Fabien’s car, which would be my chariot for the next phase of the plan. I drove to Rosalia and attempted to sleep in the car. If I’d thought ahead better I might have brought my camping gear for a bit more comfort; I barely snoozed in the upright seat and chill night air.

I checked trackleaders often when I would wake up, but there was little cell service. Also, Aharon’s dot hadn’t moved in a long time. When he left Ritzville he knew the battery was almost dead but was going to wait until it petered out to change it. Now I didn’t know if they were in trouble or if he’d simply forgotten to change the battery and they might wheel around the corner at any moment. Had Fabien brought anything to sleep with if they decided to stop?

Only partially recovered from my own ride and lacking sleep, I don’t remember the order of events the next morning well.
What I think happened is that I awoke to see a moving dot sometime after daybreak. I left town to intercept them along the trail since they were much further behind than expected; clearly they’d stopped to sleep for the night.

At some point I got a big surprise - a text message from Ben! Yeah, the guy from the beginning of the story with the RAAM rulebook. He had since moved to Portland. Sometime in the evening he decided to drive out to support Fabien. He drove through the night from Portland, tracked down Fabien and Aharon as they began moving again in the morning, and then had made it to Rosalie, where I no longer was, and was trying to find me! Absolute. Nutter. … !!

With friends like that you can’t help but pedal your bike. And that’s exactly what Aharon did. When they chose to sleep the night before he was moving at such a slow pace in pain he couldn’t imagine ever finishing. He and Fabien huddled, using a single bivy cut open, through the chill night. Sometime in the morning he tried calling me to call it quits and get a ride, but the call never went through! By the time Ben found them they had resolved to continue riding, lacking options, and followed through with that plan in spite of Ben’s inviting and spacious van! 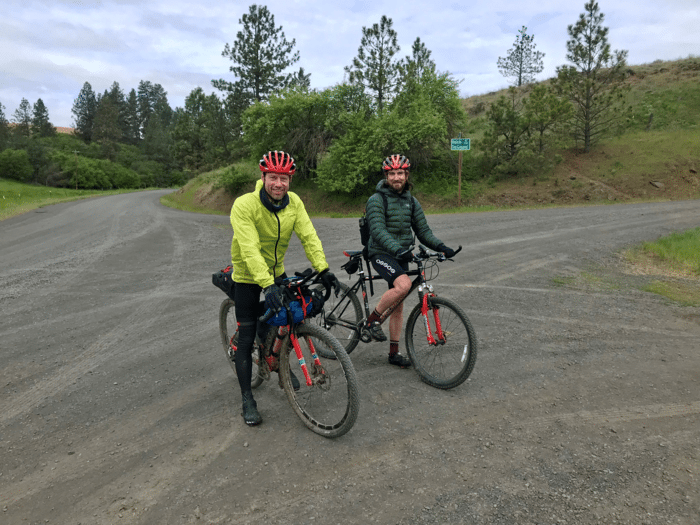 Already out of town, I chose to follow through as well and meet up with the riders. It was good to see them both warmed up and in good spirits.

I leap frogged a few times watching them, brief video below of them:

YouTube video of the duo crossing a bridge. Remember to right-click and open a new tab!

I eventually drove back to Rosalie and had a good visit with Ben over pizza and coffee. Seeing the Aharon dot closing in, Ben hopped on his road bike to join them for the mile or so of pavement into town. 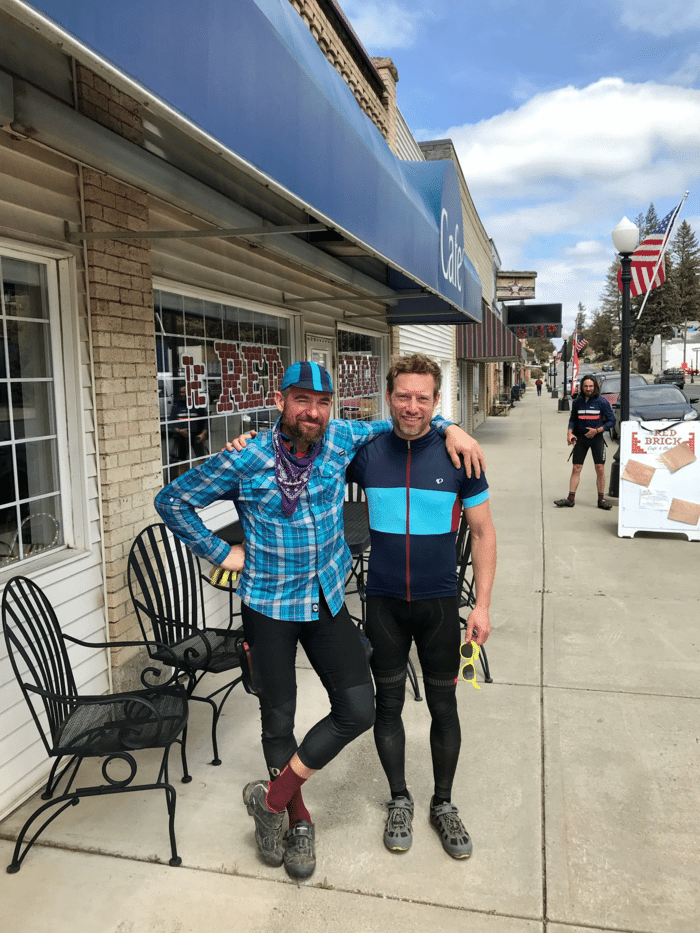 Aharon and Justin arrived in town at nearly the same time so we shared a table in the local café for a quick lunch. 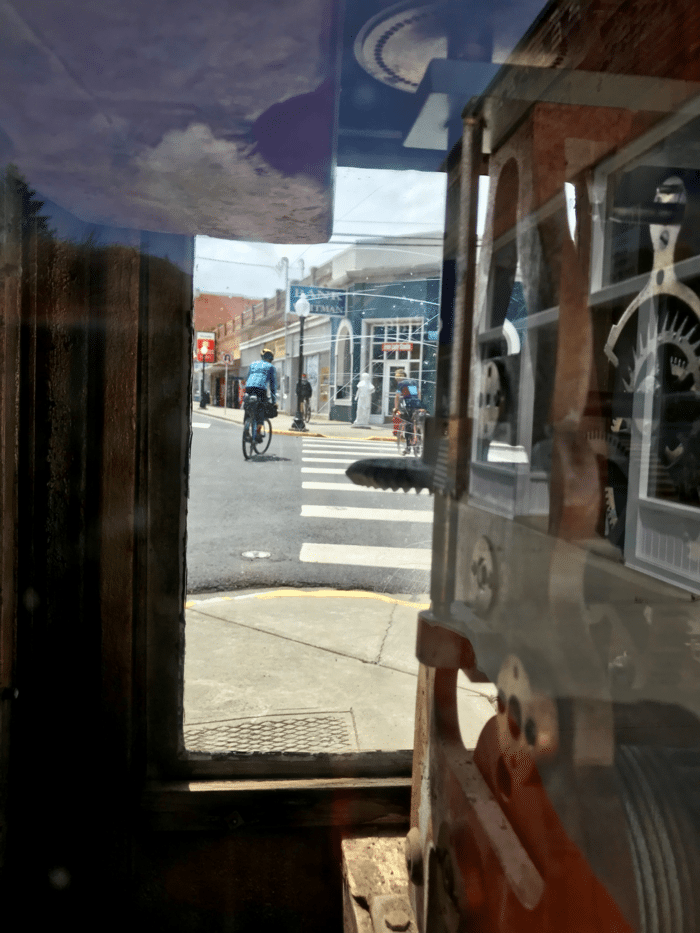 Aharon was a big maybe to continue. Having friends around him cheering him on was a huge boost, but the pain was real. We dug up some supplies at the market and taped his knees for some possible relief. 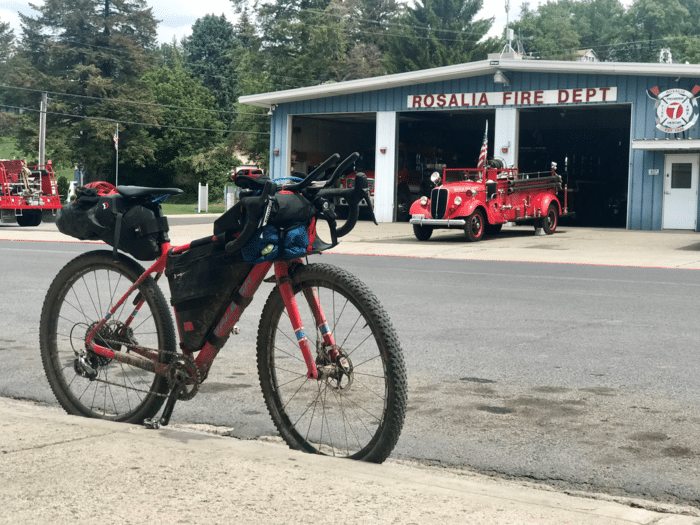 Eventually he made the call; he and Fabien got back on their bikes and wheeled out of town! I said my goodbyes to Ben who was planning to drive straight home and catch some sleep.

With only about 30 miles left on route we were all excited! I jumped ahead of them repeatedly to watch, shout encouragement, and catch some footage:

YouTube video of them detouring around a collapsed trestle. Remember to right-click and open a new tab! 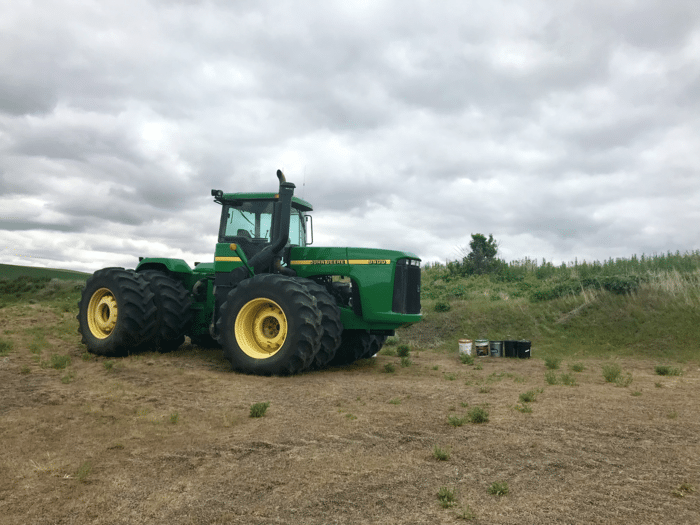 I even had time for a tractor glamour shot!
This next one surprised me. It’s a steep hill down to the road and I really didn’t want to miss them since I’d staked out the spot carefully and knew they’d be moving quickly. I heard brakes squeak and quickly hit the record button, phone already in hand! It was… not them. David W was a man possessed that day and had overtaken them! I reset the camera and waited for the next squealing of brakes:

YouTube video of another trestle detour. Remember to right-click and open a new tab! 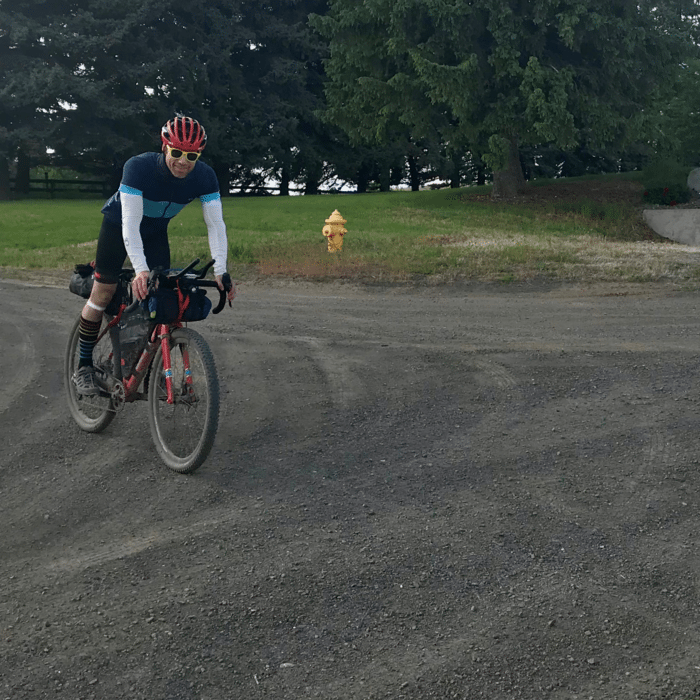 Waiting at the edge of Tekoa I got to see David go whizzing by again while his wife cheered him on from the same vantage point I chose; so focused he barely recognized we were there! 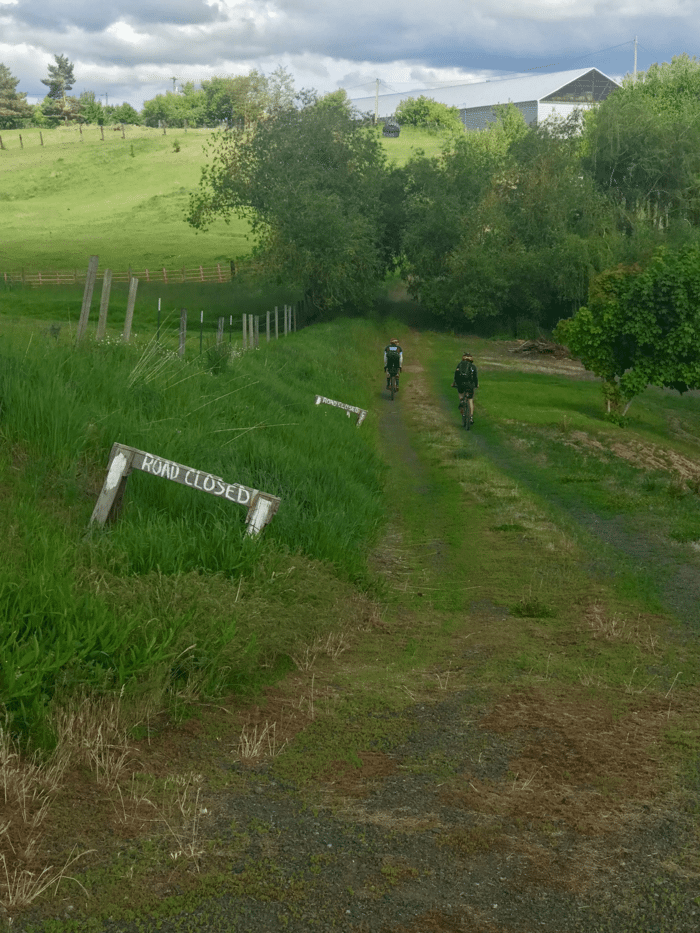 This is one of my favorite photos of the trip, a little hidden Troy nugget as you pass through Tekoa before the “victory lap” to the border. All the cheering done, I waited at the finish line.

Then suddenly there they were, Fabien giving Aharon space for his sprint victory (always sprint the finish he says):

YouTube video of Aharon’s finish. Remember to… oh you’ve got it by now 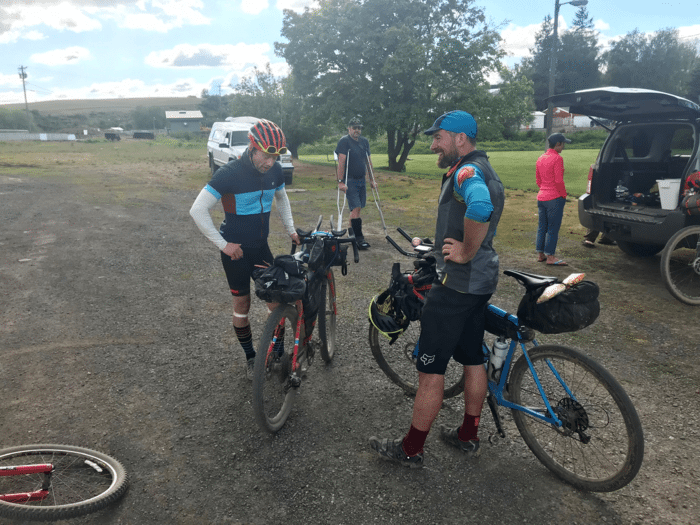 After pushing through all that, Aharon crossed the line - an XWA finisher, no small feat! 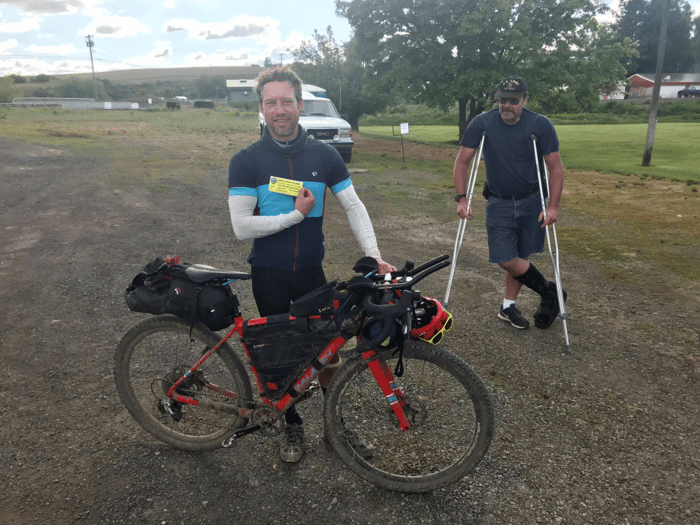 And a top 10 at that; still a winners coupon waiting for him!
We ate in Tekoa to celebrate, use the coupon, and then packed in Fabien’s car for the long drive back home. Watching the town names appear on freeway signs every 20 minutes or so and remembering the grueling task of reaching them by bike on a Troy route was a humbling experience for sure… 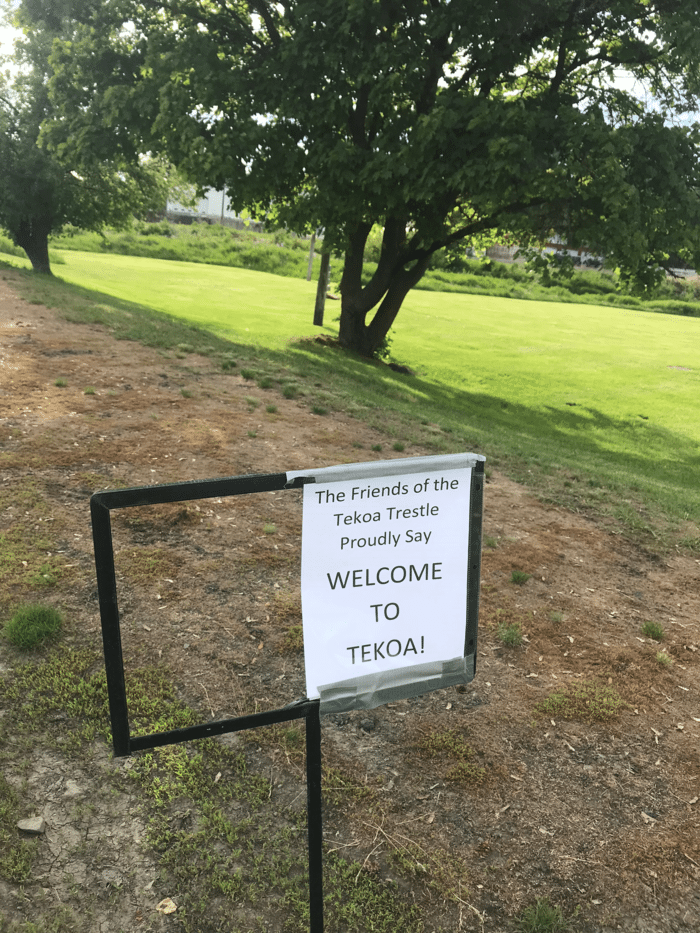 Gear List - woefully unfinished, I’ll get back to this, I promise

And that’s exactly what I did! I woke up and felt AMAZING! There was no hurry that morning; I wasn’t back in race mode yet and the sun was out. I WALKED to the nearest grocery store for breakfast and a resupply. The first attempt at... Continue →